0
Product was successfully added to your cart

Readers have described Song of Turand as “inspirational” and “unique”.

On another world, much like earth, the nation of Turand suffers tragic occupation by the army of the Sifiq Kingdom. The Sifiq are cruel and bloodthirsty, inflicting violence and subjugation upon the people of Turand.

Alexa, the sole, remaining member of the sacred Order of Val, is a young priestess who has dedicated herself to the service of her god and her people when she was very young. Betrothed to Victor, a dynamic nobleman from the south of Turand, she travels alone to the exotic, capital city of Toravalia, in hope of securing his release from Zenox Prison. Having survived the Sifiq persecution of her mystic order, she arrives at the royal palace to begin a series of events that begins with a heart breaking trial of her own faith.

Can faith alone inspire Alexa to maintain her path? What is her god’s true intent for the last member of his servant priestesses? With war imminent, can Alexa persevere as more than a symbolic leader to her people?

Song of Turand is the result of many, many years worth of writing. The story, which bears its own life, began nearly fifteen years ago as a series of vivid dreams.
I have seen the faces of Gregor, Alexa and Victor. Their lives… their hearts…their souls…all were presented to me in ways I cannot begin to describe. Their experiences in Song of Turand are an introduction to a different world… one which in many ways mirrors the difficulties we encounter here on Earth.

The threads running through this story weave patterns with which we all can relate…patterns which reach into many who dare to dig deeper. Courage takes on many faces in many colors. The greatest show of courage that exists is when we ask ourselves if we can hold ourselves faithful to what is right and answer: “Yes, I will follow this path wherever it leads. ” 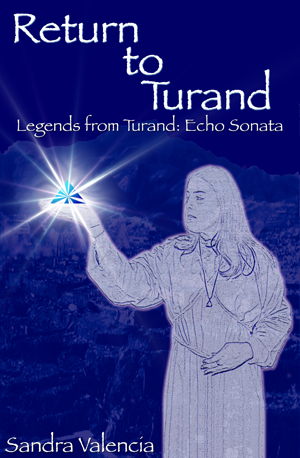 Nearly two decades have passed since occupation and war ended in Turand. Through faith and hard work, its people have recaptured vitality and prosperity that once characterized their nation. However, new questions assail them and the leaders who once guided them to victory. Their High Priestess Valkana has mysteriously disappeared and only the Valkana’s presence allows Turand to thrive in spiritual harmony.

Through lapses into the wealth of memories, King Gregor and Lord Victor Garogan seek strength to face a painful present. Neither makes any effort to conceal his love for Alexa, the Valkana, while mourning the loss of the woman each loves more than life itself. At the same time, they search for reasons behind her unexplained, heartbreaking absence.

I was amazed by how real the characters seemed and the way their struggles touched me.

One of the hallmarks of a great story is its ability to offer answers to life’s difficult questions. Return to Turand does just that.